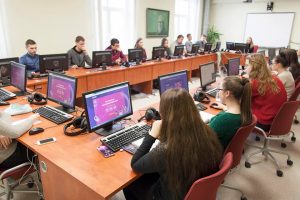 On March 27th, 2019 the Lithuanian Free Market Institute ran the second edition of the National Economics Exam. Aimed at promoting economic literacy and the relevance of economics education, the exam is intended for all citizens interested in measuring their knowledge of economics.

Nearly 8,000 people from all over Lithuania and beyond – the United Kingdom, Germany, Ireland, Singapore, the United States, Australia, Switzerland and other countries – took the exam. Secondary school students were the most active participants. On average, participants responded correctly to 50 percent of the questions. Only 17 citizens proved their excellent knowledge of economics by answering successfully all questions compared to 66 last year.

Participants found it most difficult to answer a question on relative poverty: only one in five answered correctly when asked about the effects of reducing income on the number of people living in poverty. But as many as 86 per cent had no trouble answering the question about currencies that circulated in Lithuania in the 21st century.

Competing in three categories – among school pupils, university students and citizens – participants completed an online test of 30 multiple choice questions and an open-ended question on the fundamental principles of economics, personal finance, entrepreneurship, and economic policy. The tasks were designed to encourage critical thinking and problem solving instead of measuring purely theoretical knowledge.The best participants and the most active schools and teachers will be invited to an award ceremony in the Ministry of Education, Science and Sports where they will be awarded monetary and special prizes, and receive LFMI’s textbooks Economics in 31 Hours. Winners will be chosen by a panel of experts, consisting of renowned scholars and economists.

The Lithuanian Free Market Institute partnered with the Lithuanian National Radio and Television, the Ministry of Education, Science and Sports, Lithuania’s leading universities, educational institutions, school teachers, economists and a dozen of business companies, all realising the importance of economic literacy and eager to challenge the status quo. The exam was widely covered by the media and very well received by the public. Through news portals, the national radio and television, public transportation and outdoor billboards, as well as in cinemas, schools and universities we reached the audience of over 19 million, resulting in 12,000 registrations.