More Liberal Voices. Restrictions on the Posting of Workers: Protectionism against the Poorer Member States

Restrictions on the Posting of Workers: Protectionism against the Poorer Member States

The proposed amendments to the posting of workers directive, which the European Commission and France are forcing, are nothing but protectionism aimed against the poorer Member States. The introduction of the principle of “equal pay for equal work in the same place” will severely limit the competitiveness of companies from lower-wage Member States in exporting services to North-Western Europe. In fact, Poland could just as well propose to limit the competitive advantages of the richer Member States, that have more capital per worker, which allows them to produce goods more cheaply. An analogous rule would for example prohibit the sale of French and German cars in Poland cheaper than the ones produced domestically. This is a road to nowhere.

Posting of workers in the European Union

Posting of workers is a part of the EU common services market. A worker is employed in another EU Member State, usually for a few months to provide a service for her employer. Batsaikhan (2017) gives the example of a Danish construction company winning a contract to build an office building in Vienna. It may then want to send its employees to Austria to complete the project. These workers pay taxes in Denmark (for at least 6 months), pay pension contributions in Denmark (for at least 2 years) and are subject to a mix of Austrian and Danish labour laws. At the same time these workers must earn at least the Austrian minimum wage during the posting.

In 2015, 2 million workers were posted across the EU, although this overstates their number, because a typical posting takes less than a year. When Darvas (2017) corrects this number by the available (limited) data on average posting duration, he arrives at over 3-times smaller number. Apart from them, however, there are 8.3 million intra-EU immigrants working or seeking work in another Member State. People living in the border areas and commuting to work abroad are another 1.3 million (Batsaikhan, 2017). For comparison, the EU labour market consists of 221 million workers, of which 144 million belong to the euro area.

Jean-Claude Juncker, President of the European Commission and Emmanuel Macron, President of France, are pushing for an introduction of the principle of “equal pay for equal work in the same place.” According to this idea, posted workers should earn as much as their local counterparts.

“Equal pay for equal work in the same place” would make it very difficult for companies from poorer Member States to post workers. Benio (2017) on a sample of 21 thousand Polish posted workers in the years 2013-2015 shows that their posting abroad increases personnel costs on average by 41% in relation to work in Poland. These additional costs result from the costs of accommodation, additional compensation or transportation. If the wages of posted workers must be identical with those received by the locals, then together with additional labour costs associated with posting, it would be very difficult for Polish companies to export services and post workers to the richer Member States. Such companies would have to be much more competitive than the local ones.

Forced changes equal to protectionism contrary to the spirit of the common market. The logical consequence of “equal pay for equal work in the same place” would be subsequent regulations directed against the poorer Member States that have lower labour costs, such as tariffs (goods produced by lower paid workers than the ones in North-Western Europe) and barriers to job offshoring (i.e. moving shared service centres from North-Western Europe to Poland). In light of this, Poland could just as well propose to reduce competitive advantages of the richer Member States, as they have much more capital per worker, which allows them to produce cheaper goods.

Unfortunately, this is not the first time that the richer Member States have resorted to protectionism against companies from the poorer Member States. Newspapers have long reported that inspections of Polish construction companies in France are used to supress their activities (Gazeta Wyborcza, 2014). Belgium, France, Germany and the Netherlands prohibited sleeping in truck cabins. There are cases where a Polish carrier will deliver goods on Friday in time for the weekend, but despite that the recipient would not unload them. This creates additional costs for these carriers (hotel or fine), and making recipients reimburse these costs is burdensome (Sławińska, 2017). On the other hand, Austria, France and Germany have introduced minimum wage regulations, which hinder the activities of truckers from other Member States on their territory, not only due to wage levels, but perhaps mostly due to burdensome formalities. After initial opposition, the European Commission started work on such regulations at the EU level (COM, 2017). In practice, many similar restrictions remain under the radar of national media, but over time they accumulate and may create significant barriers.

Poorer Member States have comparative advantage in trade in services

The dispute over the posted workers is a part of a larger dispute over the trade in services between the richer and poorer EU Member States. Richer economies have more capital per worker, which means workers have at their disposal more machines, ICT equipment, software, etc. This gives them an advantage in the production of goods, i.e. exporting cars to Poland. Poorer economies, such as Poland, hold much less capital per worker. However, their lower level of economic development means that their price and wage levels are lower. This in turn gives them an advantage in the export of services, because personnel costs amount to a larger share in the costs of services. Lower personnel costs are one of the competitive advantages of Polish companies providing construction and transport services in France and other richer Member States. Posting of workers is a part of the common services market.

Comparative advantages of the richer and poorer Member States are well reflected in their trade balances. The countries with higher incomes per capita have significantly higher balances of trade in goods (Figure 1). Conversely, the poorer countries have significantly higher balances of trade in services (Figure 2). Also, the IMF (2015), based on an index of revealed comparative advantage shows that among the new Eastern Member States, Poland, the Czech Republic, Hungary and Romania have comparative advantage in the export of services within the EU. Having a reveal comparative advantage in services means that these countries export services at relatively lower alternative cost. The index is the ratio of the share of a country’s exports of services in the rest of EU services exports to the share of non-service country’s exports of goods to the rest of EU non-service exports. 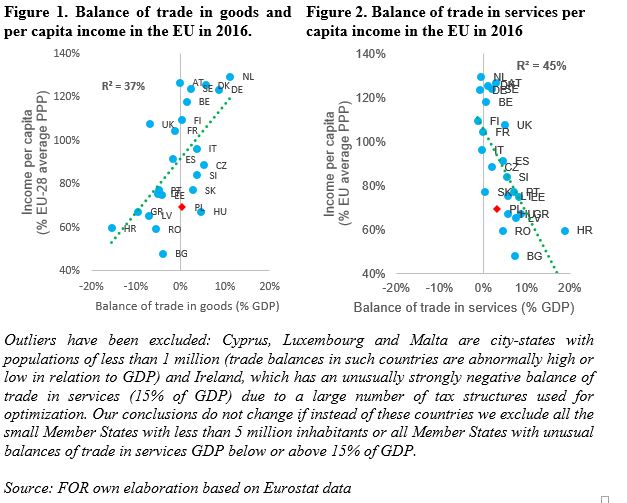 Since the 2004 enlargement of the EU, the poorer Member States have significantly improved their balances of trade in services. In the years 2005-2016 Poland’s balance of trade in services increased by 2.4 percentage points of GDP, while France’s deteriorated by 0.8 percentage points of GDP. The balance also improved strongly in the UK, despite the fact that it is one of the richer countries, because it is an economy which is highly specialized in the export of financial and business services. 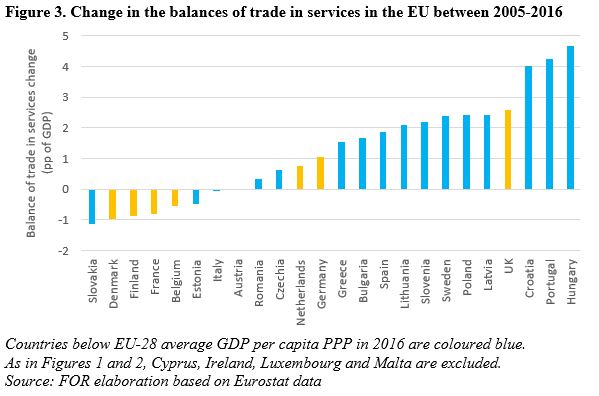 As shown above, Poland and other poorer Member States have a comparative advantage in the export of services. Trade is always beneficial for both parties, but stronger integration within common market, fostered by further liberalization of trade in services, will accelerate catching-up of the living standards in poorer Member States to the richer ones.

Access to the single market makes it easier for the poorer Member States to increase the quantity and quality of exports, thus contributing to their quicker economic convergence. The common market gives companies opportunities for growth, while subjecting them to stronger competition and strengthening their incentives to invest in higher productivity. Openness to trade and investment serves as a channel for the transfer of innovation, which eventually leads to improvement in the quality of exports, which is the complexity and value added of exported goods and services (Hausmann et al., 2007). Thus the value of exports from the CEE region correlates with export quality (IMF, 2015). An increase in exports and their quality in turn contributes to the convergence of the poorer Member States.

Common market in services is important, because services constitute the largest part of GDP in modern economies. In Poland, as in other EU Member States, industry in 2016 accounted for only 33% of GDP, according to World Bank data. To compare, services accounted for 64% of GDP, meaning that a greater part of the economy remains relatively less integrated in the common market. Stronger integration of services will make poorer economies and their productivity grow faster together with wages and the standards of living.

Unfortunately, the rules protecting the common market in services are not as well established as the ones pertaining to trade in goods. The common market in goods has been built in Europe for over 60 years. At the same time, even in the trade in goods, the EU remains much less integrated than the United States is. Compared to the US, EU Member States exchange goods internally on average 3-4 times more often than trade with the other Member States even when adjusted for differences in language, size, distance, and common borders (Pacchioli, 2011). Despite the absence of customs duties for goods, other regulatory barriers remain: energy efficiency standards of household appliances, toy safety standards or technical requirements for vehicles, etc. These are the rules that the EU is trying to harmonize in order to allow freer movement of goods between Member States. These barriers are estimated at 45% of the value of trade in goods (Aussilloux et al. 2011), and for services this number is considered to be even higher (Aussilloux et al., 2017). In addition, the market for services is not fully integrated even in the US mainly due to widespread labour licensing regulations at the state level.

The proposed restrictions to posting of workers disproportionally hit the poorer Member States from Eastern and Southern Europe. However, these countries should not push for retaliatory regulations to protect their home markets, but to block “equal pay for equal work in the same place” and further liberalise trade in services. Deeper economic integration will accelerate their catching up to the standards of living in the richer Member States.