Lithuania has also introduced a cap on social security contributions for income exceeding a sum of 120 average wages per year (which is 8,900 euros per month) and provided for a gradual reduction in the “capped” level of employment income (to 6.200 Eur in 2020 and 4.400 Eur in 2021). The cap on the application of the tax deductible income has been increased from 1.3 to 2 average wages (1760 Eur). Mandatory health care insurance payments will not be capped.

These amendments will help to ease Lithuania’s labour tax burden which presently is heavier than the OECD member states’ average (40 percent vs. 36 percent). It will benefit 1.3 mln working population in Lithuania. An economic survey released by OECD on the occasion of Lithuania’s accession to this organization states that, in order to secure inclusive growth, Lithuania must reduce social security contributions, especially for low-income workers, while ensuring that benefits and deficit targets are maintained.

At the same time though, Lithuania has phased out its 24 year-old flat tax regime. The personal income tax has been raised from 15 to 20 percent (with the basic pension fund being transferred from the state social insurance fund to the state budget) and introduced income tax progressivity. A tax of 27 percent has been imposed on income exceeding 120 average wages per year, with this income level to be lowered in the years to come to the size of the income capped by social security contributions.

The progressive income tax will have a minor impact on the state budget. The expected revenue is estimated to amount to around 4 mln Eur in 2019. The progressive PIT will be the second smallest source of budget revenues and its introduction can be viewed as a meaningless step.

Those reforms are estimated to bring budget losses of 200 mln Eur in 2019, but the government is planning to offset those losses through anti-shadow economy initiatives and economic growth. According to EC and Bank of Lithuania, economic growth is forecast to remain strong but is expected to slow down from 3.1 % in 2018 somewhat to 2.7% in 2019. 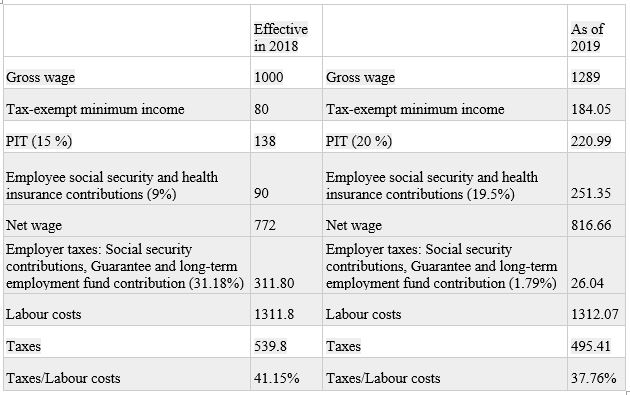 Along with the tax reform Lithuania adopted a very unsustainable pension reform. Working people will no longer be able to transfer 2 percent of their mandatory social security contributions into the second-pillar pension funds (the previous law stipulated a gradual increase in this proportion). Instead, a new formula for pension accumulation has been adopted, 0%+4%+2%. Contributions into pension funds will now comprise 4 percent of personal income and a supplementary contribution of 2 percent of the national average salary paid for the participant out of the state budget. Basically this means that the goal of transforming the PAYG system into saving for retirement is being abandoned. The law also foresees a quasi-mandatory mechanism of involvement in second-pillar pension funds. Given a reduction in the working-age population, the adopted pension reform is a serious step backwards.

Another distressing amendment is that the State Social Insurance Fund Board will become the only payer of pension annuities. This means that contributions accumulated in private pension accounts will ultimately end up in a state annuity fund. There will be fewer options for deferred annuity and inheritance of unpaid part of annuity.