More Liberal Voices. On the Effects of Tobacco Taxation

In LFMI’s view, taxation of tobacco products raises severe economic and social concerns which should be taken into account when formulating further tobacco taxation policies, including on novel tobacco products. We argue that increased education rather than higher excise duties should be the main policy in reducing the incidence of smoking.

Taxation of tobacco products creates a disproportionately high burden for citizens in countries that have lower income levels. Although nominal tobacco tax rates in the Baltic States are not lower, the affordability of tobacco products is among the lowest due to a relatively low income level (Picture 1). It can be seen that cigarette consumption in Lithuania makes up 5 percent of annual net average earnings, while in Luxembourg it accounts for only 1.4 percent. The low affordability leads people to turn to the informal and illegal tobacco market. 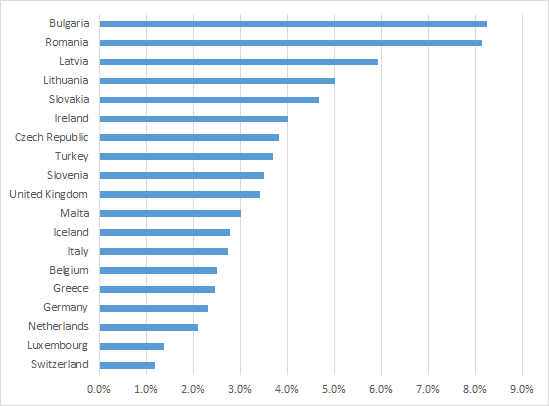 Tobacco products constitute a much higher proportion of the consumer basket for lowest-income earners. This makes tobacco taxation regressive. Furthermore, its financial burden for the most vulnerable segments of society is particularly large because of low price elasticity in European Union countries, which is estimated to be −0.4 (Picture 2).[1] These population segments tend to rely on the informal sector and their tobacco consumption rarely decreases. To add, due to the regressive nature of excise taxes, higher tax rates do not provide sufficient incentives for wealthier people to stop smoking either. 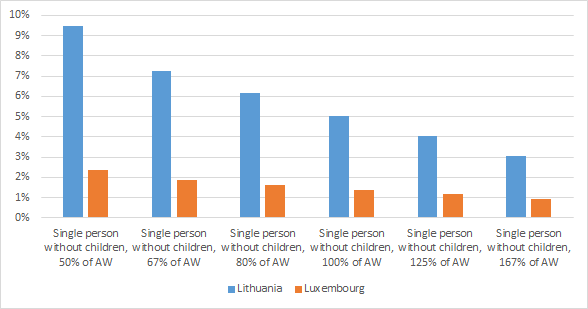 As mentioned, high taxation of tobacco products coupled with geographical proximity with third countries incentivizes illegal tobacco trade in Lithuania and other countries. It is estimated that illicit tobacco accounted for 19.6 percent of the whole tobacco market in Lithuania in the last quarter of 2017 (Shadow tendencies in Lithuania, 2017). During the economic crisis, when people’s income fell, it was as high as 42.8 percent. These data suggest that the informal tobacco market is flexible and may expand substantially as affordability of tobacco products falls.

To conclude, while increasing public health and reducing the incidence of smoking should be a priority, we believe that taxation of traditional and novel tobacco products is not the right way to accomplish these goals. Due to entrenched shadow economies in poorer EU countries, positive effects of lower tobacco usage from higher excise duties are reverted. High excise duties do not work well in Eastern European countries which are close to EU borders. We believe that the correct policy on reducing smoking incidence is consistent education about the harm caused by tobacco consumption.

[2] We assume that a smoking person buys on average 365/3 cigarette packs per year (which corresponds to buying a pack of 20 cigarettes once every three days).

[1] We assume that a smoking person buys on average a pack of 20 cigarettes once every three days.