Political Economy of VAT in Poland

Value-added-tax (VAT) is the most important source of public revenue in Poland. It is less distortive than taxes levied on income and thus a heavy reliance on it is the right approach. However, the VAT base in Poland has its weaknesses due to both domestic and EU polices. National authorities overuse reduced rates, making the VAT system too complicated and problematic for businesses while a zero rate on intra-EU trade incentivizes fraud.

An overview of the Polish system

VAT constitutes a major revenue stream for the Polish Government. In 2016 VAT alone constituted 21 per cent of the tax burden while its combination with excise duties and other indirect taxes totaled to nearly 40 per cent of the tax burden, exceeding the EU average of 34 per cent. Such a heavy reliance on indirect taxation is a strength of the Polish tax system. Research shows that indirect taxes like VAT are less distortive than income taxation and therefore have lesser effect on economic growth (e.g. Arnold 2008, Johansson et al. 2008, Ormaechea & Yoo 2012). Moreover, behavioral research shows that consumption-related taxes are less detrimental to the supply of labor compared to direct labor taxation (Blumkin et al. 2012). 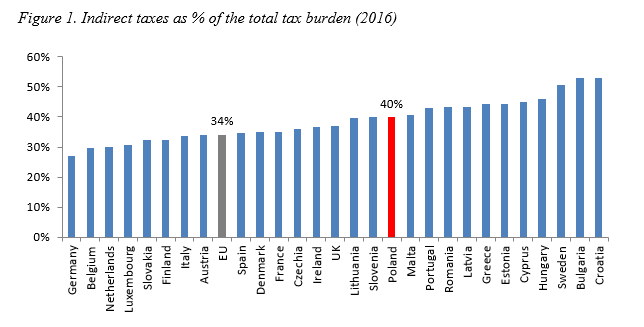 A sizeable VAT revenue is the result of a high standard rate. Currently, the standard VAT rate in Poland stands at 23 per cent and is among the highest in the EU (Figure 2). Theoretically, the standard rate is 22 per cent as it was “temporarily” increased 2011 for the period of three years. However, there is no political will to re-introduce a lower rate. 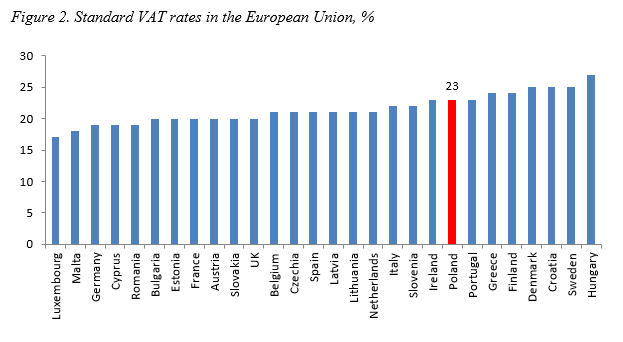 Despite a relatively high rate, VAT revenue in Poland is far lower than it could be due to many exemptions and a long list of goods subject to reduced and super-reduced rates. According to estimates by CASE, policy gap (the tax expenditure in VAT divided by VAT revenue that could be expected when standard rate would be applied to all goods and services) in Poland is among the highest in the EU.

The size and scope of tax exemptions in VAT in Poland are unjustified.  More than half of the VAT preferences are supposed to support low-income households, but such support is not targeted and thus highly inefficient. While low-income households (10 per cent of the poorest households in Poland) gain around PLN 4 billion annually (approximately EUR 1 billion), the annual income of the most wealthy (10 per cent of the wealthiest households in Poland) is close to PLN 11 billion (approximately EUR 2.5 billion). There are two reasons for this. In case of basic goods (e.g. food), wealthier households have higher consumption, thus in nominal terms they gain more from lower tax rate. Furthermore, lower VAT rates also apply to many goods and services consumed mainly by wealthier households (e.g. gastronomy and accommodation services, theater tickets, books and magazines).

Many exemptions make the Polish VAT system particularly complicated. The problem is further exuberated by frequent changes. For example, although the majority of food is subject to a reduced rate, some spices, sauces and drinks are not. A hot dog, consisting of a roll, a sausage and sauce can be taxed in more than twenty ways, depending on:

Such differences encourage companies to search for loopholes that allow them to apply the lowest possible tax rate to goods and services they offer. Simultaneously, the Ministry of Finance constantly tries to close such loopholes; however, without changes in the underlying principles, the Ministry fails to do so. Taxation of coffee is a good example of cat-and-mouse game played by taxpayers and the Ministry of Finance. Although coffee is subject to 23 per cent rate, until recently coffees with larger amount of milk (e.g. latte) were considered milky products subject to reduced rates. After the Ministry has issued a binding interpretation that all coffee products are subject to 23 per cent rate, many coffee shops changed their approach. Instead of selling coffee drinks, they started offering packages with tiny biscuits, where 90 per cent of the price is attributed to the biscuits (reduced tax rate) and only 10 per cent to the coffee. The underlying problem is that policy-makers try to apply different rates to virtually identical goods using vague criteria. As a result, tax regulations are unpredictable.

In the field of optimal tax theory there is a consensus that exemptions from indirect taxation are inefficient means of redistribution (e.g. discussion in Mirrlees Review[1]), but political reality in Poland (and many other countries) is different. All attempts to limit or eliminate reduced VAT rates in Poland are demonized as an attack on the poor. It should be noted, however, that occasionally aired in public debate, ideas to introduce a single VAT rate (mainly by smaller opposition parties) are usually poorly designed. Recurring idea of a single rate of 15 per cent or 16 per cent (it would be fiscally neutral) would disproportionately affect poor households whose consumption is rather limited to goods and services subject to reduced rates. Therefore, there is a need for reforms that simultaneously make the system simpler, strengthen incentives to work and would not make poorer households worse-off. The introduction of a single rate of 20 per cent or 21 per cent would be a good idea as the resulting revenue could be used to reduce labor taxation at the lower end of the scale (taxation of low productivity/low income workers).

VAT revenue in Poland is significantly lower than one would expect taking into account the current tax law. CASE (2016) defines VAT gap as a difference between VAT Total Tax Liability (VTTL), which is the theoretical tax liability according to tax law, and is estimated using a top-down approach and the actual VAT revenue, expressed as percentage of VTTL. In 2014, CASE estimated a 25 per cent VAT gap in Poland which was among the seventh highest in the EU.

The size of the VAT gap was a serious topic in 2015 electoral campaign – the then main opposition party (PiS) accused the ruling PO-PSL coalition of negligence. In fact, the VAT gap grew strongly from 2000 through 2015. With the new government claiming a huge success, today there is a strong increase in VAT revenue; however, it is mainly the result of:

A reliable evaluation of the real effects of the recent governmental actions will be possible only after the next cyclical downturn. Only then will it be finally revealed how much of the recent improvement in VAT collection was structural and how much only due to cyclical factors.

As the size of VAT gap was a subject of public debate during the last election campaign, it was mainly attributed to fraudsters and intra-EU trade (e.g. missing trader scheme). Definitely, as experience of other EU countries indicate, a zero per cent VAT rate on intra-EU trade incentivizes fraud which does not only undermine public revenue, but also distort competition as companies that cheat gain an advantage over their law-abiding competitors. However, according to the estimates by Poniatowski et al. (2016), only 11 per cent of the VAT gap was due to a missing trader, while 32 per cent was due to refund overstatement (based on the use of unauthorized invoices). Still, authors were unable to allocate over 40 per cent of the VAT gap to a particular source – it could be both shadow economy as well as fraud relating to intra-EU trade.

The present overuse of reduced rates by national authorities coupled with a zero per cent rate on intra-EU trade stemming from EU regulation makes the VAT system in Poland particularly complicated and prone to fraud. The best solution would be to introduce a single rate for domestic purposes (with proper compensation for the poorest households) coupled with the establishment of a definite VAT regime in the EU that would eliminate the zero rate. As it was argued earlier, however, at present there is no political will in Poland to introduce a single VAT rate. Similarly, at the EU level, there is no consensus how the VAT system should look like; therefore, a transitional regime established two decades ago is still in place.

CASE (2016) Study and Reports on the VAT Gap in the EU-28 Member States: 2016 Final Report, Center for Social and Economic Research, Warsaw, https://ec.europa.eu/taxation_customs/sites/taxation/files/2016-09_vat-gap-report_final.pdf